Home - First World War - They came from across the globe - Moroccans, Algerians, Tunisians

From Africa to the Artois…

For the vast majority of the inhabitants of the Pas-de-Calais, the name Vimy is indelibly linked with Canada because of the battle that took place there in April 1917. The Canadian memorial appears in every history book and travel guide and is one of the main monuments in the region. In fact, Vimy is technically not even part of France, as the monument officially stands on Canadian soil.

The Moroccan monument was in fact restored a few years ago (paid for by the King of Morocco), yet passes (almost) unnoticed. So why is it here? The reason for its presence is quite easy to identify: fortified and held by the Germans since 1914, Vimy Ridge had long been coveted by France because of its strategic position, in the same way as the hill of Notre-Dame-de-Lorette.

In 1915, the French and German armies confronted each other in the Souchez sector, each embedded in successive lines of trenches. Despite its weak artillery, France’s continued aim was to retake Lorette and to break through the front. On this occasion it set Vimy Ridge as its objective, even though this seemed somewhat unrealistic at the time (download the pdf to read more). 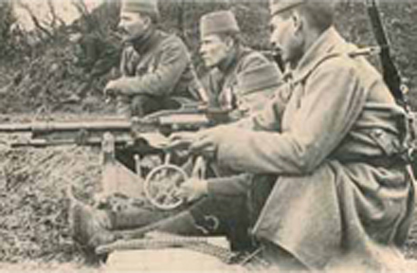