Home - First World War - They came from across the globe - Irish

from the north and south “united” in the trenches

Unionists and Nationalists. Protestants and Catholics. North and South. An island divided, even more so after the bloody events of the 1916 “Easter Rising” in Dublin (the rebellion against the British occupation and the terrible repression that followed). However, a similar hell existed in the trenches for the 210,000 Irish who served in the British army during the First World War, in which 35,000 of them lost their lives. Yet, it wasn’t until 1998 that, as a sign of reconciliation, the “Island of Ireland Peace Park” was inaugurated in Messines.

Having arrived in France at Le Havre from 18 December 1915 onwards, the16th Irish Division had their first taste of the trenches in early 1916. From 27 to 29 April, it was fully engaged in the Battle of Hulluch, one of the battles of the Great War in which poisoned gas was used.

During the German attack on 27 April, out of the 1,980 victims, 570 died, to be followed by numerous wounded later on as a result of respiratory problems.
To incite the Irish, the Germans had placed posters in front of the trenches recalling the events of the “Easter Rising” on 24 April.

In August 1916, the 16th Division adopted new positions in the Somme. In June 1917, the Catholics from this 16th Division joined up with the Protestants from the 36th Ulster Division near Messines, taking the village of Wijtschate side-by-side on 7 June.

Following action at Péronne and Hamel, the 16th Division was relieved in early April 1918, following an order for it to return to England via Aire-sur-la-Lys and Samer. 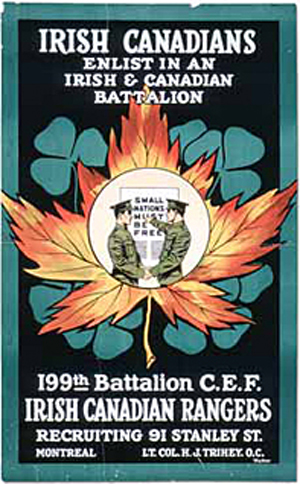