Home - First World War - They came from across the globe - Australians

Known as the “Diggers”

These smiling soldiers full of swagger and with a rifle slung over their shoulders were from a country on the other side of the world. Australian soldiers were affectionately known as “Diggers” (the word refers to a gold miner), in the same way that the British were known as “Tommies” and the French as “Poilus”. On their heads they wore their characteristic tilted “slouch hat”, with the left side folded up to enable their rifle to be carried on their shoulders. On the turned-up side, the “Rising Sun” symbolised the sun rising on the huge British Empire, to which Australia belonged at the time.

Out of a population of four million inhabitants, some 313,000 Australians travelled thousands of miles to join in the war effort in Europe. For many of them it was an adventure and a trip of a lifetime, and for 60,000 of them a journey that ended in their deaths. Out of this hell, Australia forged its national identity. Every 25 April – the date on which the Australian and New Zealand Army Corps (Anzac) came ashore on a beach on the Gallipoli peninsula – the country commemorates Anzac Day so as not to forget the sacrifice of its soldiers during the First World War, as well as other conflicts in its history… (download the pdf to read more) 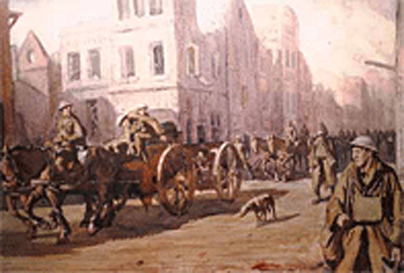