Home - First World War - They came from across the globe - English

Étaples was a remarkable railway crossroads, as it was from here that the battlefields of the Somme and Artois could be reached. If you take into account the proximity of Boulogne- sur-Mer and the existence of extensive available land, you can easily understand why the British were so keen to establish themselves in this perfect strategic location. It was here that the military had extended the largest British base in France. In all probability, over a million men passed through here between March 1915 and November 1918, and the base accommodated 60-80,000 soldiers at any one time.

A huge camp was therefore set up to store equipment, to provide training for troops and to ensure their fitness. It also housed around twenty hospitals, with 20,000 beds, to receive full trainloads of wounded soldiers arriving here. It even became necessary to build an additional station. The injured were first received at rest posts before being taken to the camp in ambulances by British army auxiliaries known as the “Khaki Girls”, who were quickly given the nickname of “Cats qui gueulent” (screaming cats) by locals in Étaples. These young women, who also fulfilled the role of cooks, typists, telephonists for military staff etc, “elicited not even the slightest astonishment from local inhabitants who, for the first time in their lives, were seeing women dressed in uniform”, explains Pierre Baudelicque, a history professor at the university.

Upon their arrival, in Étaples as elsewhere in the Pas-de-Calais region, the soldiers received a warm welcome from the local population, “who saw them as allies determined to support the French fight, even if in reality Great Britain had declared war to protest against the German violation of Belgian neutrality”, adds Xavier Boniface, a lecturer at the Université du Littoral. (download the pdf to read more) 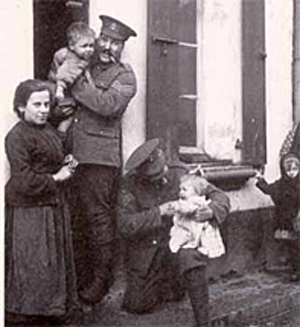 Vera Brittain was born in 1893 into a wealthy English family. From an early age she refused to accept the restrictions placed on young women of the time, and envied her younger brother who was able to leave the family home without getting married. A rebel by nature, she talked of nothing else except her independence, her studies and her career. Despite the disapproval of her father, she succeeded in gaining a place at Somerville College, Oxford, where she fell in love with Roland Leighton, a friend of her brother.
The future seemed nothing but rosy for them when war broke out in 1914. “Carried away with emotion and the glorious face of patriotism” (these were her words),Vera put her name forward as a volunteer and underwent training as an auxiliary nurse, once again against the wishes of her father.

It was only three weeks later that she began to truly understand the meaning of war, and every day she was more and more horrified by the butchery of it all. In England, Malta, France and Étaples in particular, she learnt of the deaths of her friends, her fiancé, and later on, her brother…