Home - First World War - They came from across the globe - Canadians

from Vimy Ridge to the Canal du Nord

He has counted the graves in three military cemeteries in his local commune. Guy de Saint- Aubert is the mayor of Sains-lès-Marquion and has thrown himself into a commemorative project that he wasn’t in the least bit expecting. He was certainly familiar with the main thread of the turbulent events experienced in his village during the Great War, but there is so much more to the story…

“I was aware that villagers had been evacuated, and that the Germans had blown up the church in 1917. My brother had even received a photo of the event sent by a German with whom he corresponded and who had even fought in Sains!” The mayor had even heard talk of the “capture” of the village, of its “reconstruction”, involving the digging of twenty wells, “plus, of course, the British cemeteries”. Except that of the 273 graves at Quarry Wood, 260 are Canadian; of the 257 at the Ontario Cemetery, 142 are Canadian; and of the 227 at the Sains-lès-Marquion British Cemetery, 177 are also Canadian. It was the arrival in Sains of Michel Gravel in 2003 which “set the cat among the pigeons” for the mayor of the village. Since 2001, Gravel, a roof salesman from Cornwall, Ontario, has spent all his time researching Canada’s military past. An inveterate history buff, he has thumbed his nose at academics.

In particular, he has published “Tough as Nails” (“Arras à Cambrai par le chemin le plus long”), which provides a new insight into the capture of Canal du Nord. Supporting documentation comes in the form of regimental journals and the recollections of “Hillie” Foley, a roofer from Ottawa. “Gravel told us what happened on 27 September 1918 in Sains-lès-Marquion”, states Guy de Saint-Aubert, “and I wanted to satisfy the curiosity of our local inhabitants.”

Hence the inauguration of a commemorative plaque on the square on 31 August 2008. Ninety years before, on 27 September 1918 to be exact, on the left flank of the Allied offensive against the Hindenburg Line, the 14th Battalion (Royal Montreal Regiment) of the 3rd Canadian Infantry Division attacked the Germans who were holding the Canal du Nord… (download the pdf to read more). 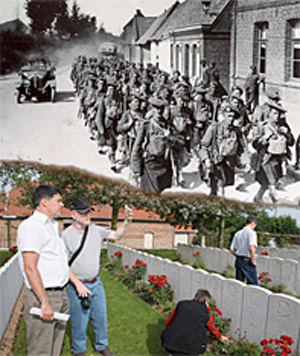 15 September 1915, 8.30pm, and the steamer Princess of Argyll is berthing in Boulogne-sur-Mer. On the quayside the few spectators “listen attentively”. For over a year now Boulogne has been used to the sight of British troops disembarking at the port, but this evening the new arrivals are speaking French.

The news travels fast: the French-Canadians are heading for the front! “The 22nd caused quite a stir”, wrote Joseph Chaballe in his “Histoire du 22e bataillon canadien-français”, a battalion officially born on 21 October 1914 following the actions of fifty or so individuals “frustrated” by the fact that the first contingent of volunteers which had departed for Europe did not include a single exclusively French-speaking fighting unit within its ranks.
On 16 September, the 22nd reached Saint-Omer, where the general headquarters allocated it an interpreter who was heard to exclaim: “mais nom d’un chien, vous parlez tous le français, et l’anglais bien mieux que moi” (“good grief – you all speak French, and English better than I do!”). 1,178 men were readying themselves for the trenches, including 1,078 French-speaking Canadians, 47 French-Americans from New England, 14 French, 10 British, 4 Swiss, 3 Italians, 2 Spanish, 1 Mexican, 1 Argentinian and some Russians!