Home - First World War - They came from across the globe - Fijians

A prince “as black as ink”

From a paradise in the middle of the Pacific to the hell of the trenches – this is the extraordinary journey undertaken by Ratu Sir Lala Sukuna, a chief from the Fijian islands, who fought in the Champagne and Artois regions and was awarded both the Military Medal and Croix de Guerre.

Josefa Lalabalavu Vana’ali’ali Sukuna was born on 22 April 1888 on the island of Viti Levu. His family were part of the archipelago’s nobility and as a young boy received a very “British” education, which included studies at Oxford University. He was in England when the First World War broke out and was keen to see battle. However, this Fijian student was black, and the British army refused to enlist non-whites. No matter, for the Fijian crossed the Channel and joined the Foreign Legion – the American Henry Farnsworth spoke of a “prince as black as ink”.

It is spring 1915 and the prince and his legionnaires are in the trenches in Berthonval. With the first brigade of the Moroccan Division, part of the 2nd infantry regiment of the 1st Foreign Legion company, Sukuna mounts an assault on the “Ouvrages Blancs” near Neuville-Saint-Vaast on 9 May 1915. Carency and Souchez followed, with their scenes of blood and fury, where the Fijian was to receive his first citation for acts of bravery.

In September 1915, Sukuna took part in the Battle of Champagne and on the 28th, in Souain, he was wounded in the temple and hospitalised in Lyon. “I am conscious of doing my duty”, he wrote to his family, “but war is hell. The sight of blood makes me nauseous, and the effect of the conflict on the local population brings tears to my eyes”.

In January 1916, the British authorities urged him to return to his homeland. He disembarked in Suva on 30 March, his head swathed in bandages. As a native islander subject to the decisions of the colonial authorities, Sukuna became a civil servant and tried to convince the British to send Fijians to the front. He was to return to France in May 1917, not as a soldier but as a sergeant and worker in the Fiji Labour Corps. In Calais, Sukuna and a hundred other men worked at the port. In January 1918, they were sent to Marseille and from there to Taranto in Italy. Eleven of his co- workers died in France and are buried in either Calais, Marseille or Taranto.

In September 1918, the Fiji Labour Corps set sail for the Pacific. After a short period as a barrister at the London Bar, this Fijian “to the core” became a leading politician in the islands. During the Second World War, he exhorted Fijians “to spill their blood for Great Britain”: two thousand fought alongside the Allies. During Fiji’s decolonisation process, Ratu Sukuna was president of the legislative council.

The “father of modern Fijians” retired in April 1958 and died on 30 May on board a ship taking him to England. Henceforth, in the Fijian islands, the last Monday in May became a public holiday known as Ratu Sukuna Day. Fiji: a Pacific idyll home to rugby and a hero of the Great War. 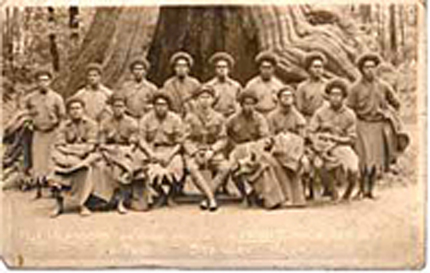