Home - First World War - They came from across the globe - Chinese

A valued labour force in the Great War

For more than a half a century André Coilliot has been collecting “souvenirs” of all shapes and sizes from the two world wars, including vehicles, uniforms, books etc. Although he has sold the majority of his “wartime treasure” to Avril Williams, an Englishwoman who has opened a museum near her tea-room in Auchonvillers in the Somme, this former railway worker from Beaurains remains one of the major figures with regard to “local history during the two conflicts”, and is an acknowledged expert on the “dark days of May 1940 in Arras” and on “Beaurains under fire from 1914 to 1917”. He is also intrigued by the presence of Chinese workers in our département during the Great War.

“I noticed some tombstones with ideograms on them in the cemetery in Ayette and asked myself why they were there?” This question has long gone unanswered, as the fortunes of Chinese labourers in our region have been barely researched – hardly at all, in fact. Things are starting to change, however: there was even a 3-day international conference on the subject in 2008, which took place in the Chinese city of Weihai, in the province of Shandong (in the northeast of the country), where the majority of the 95,000 Chinese who worked for the British army from 1917 to 1920 were recruited. 44,000 workers also made this long journey to work for the French army (the bay of Canton was a French enclave at the time).

André Coilliot takes out his “Chinese” file and pulls out a photocopy of a map indicating the numerous camps – and cemeteries – of the Chinese Labour Corps: Arques, Audruicq, Berguette, Boulogne, Calais, Dannes-Camiers, Érin, Étaples, Hardelot, Houdain, Moulle, Ruminghem, Saint- Omer, Seninghem, Tournehem, Wimereux etc – and there are still some missing. The camp in Bouvigny-Boyeffles has been rediscovered and researched by Serge Thomas and his pupils in the school in Sains-en-Gohelle. To their amazement, the school was inundated with stories. Hundreds of Chinese were indeed based in Gohelle, in the Ternois region. “In Érin they repaired tanks”, recalls André Coilliot. There was a huge factory, and the tank museum in Bovington, in England, has some photographs of Chinese workers (51st, 69th and 90th companies) from the Tank Central Workshops located in the Ternoise valley, in Érin and then in Teneur… (download the pdf to read more) 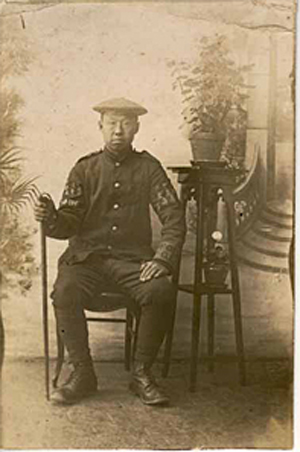