Home - First World War - They came from across the globe - French

The “Brassards Rouges”: the forgotten men of history

Have you heard of the “Brassards Rouges”? Philippe Égu from Grenay has shown a special interest in the forgotten ranks of civilian workers who, refusing to work for the enemy, were deported, mistreated and tortured.

This was the case for his maternal grandfather, Georges Cambier, a joiner, who was taken away by force at the age of 19, and who survived deprivation and numerous beatings

Few studies have been carried out on the lot of civilians in the occupied zone, although numerous eye-witness accounts tell of difficult living conditions. Requisitions, collective atrocities, reprisals and forced labour became increasingly common.

From 1914 onwards, civilians were a workforce which could be exploited for “the war effort”, in particular for the reconstruction of infrastructure destroyed as a result of the fighting. When they resisted, civilians (and occasionally even women and young girls) were deported to forced labour camps, where they formed ZABs (“Zivilarbeiter-Bataillone” or battalions of civil workers) and wore a distinctive emblem: a red armband (brassard rouge), which some wore until 1918.

Living conditions for these “Brassards Rouges” was similar to those of prisoners in deportation camps (download the pdf to read more). 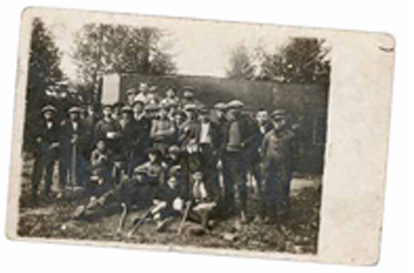 Numerous accounts tell of acts of both remarkable and more modest female bravery. “Women made the Resistance what it was”, explains 88-year-old Henri Claverie, a historian from Hénin- Beaumont.

“They broke through enemy lines to pass on messages; they lived in caves, only venturing out to visit the supply depot in order to feed their families; and for hours on end they would grind flour in coffee mills.” Simone Caffard, whose story was uncovered by Raymond Sulliger from the Cercle Historique de Fouquières-lès-Lens, was in her own way a young heroine.
A gifted teacher who was passionate about education, she gave lessons to children in the most trying circumstances and worked tirelessly to ensure that they passed their “certificat d’études” exams in 1916. Sadly, she fell ill the following year and died.

It’s a lesser-known fact that women were victims of abuse and violence (which included rape, forced labour, deportation and savage repression) if they were found to be part of the Resistance movement…