Home - First World War - They came from across the globe - Scots

25 Septembre 1915, the Battle of Loos. The deafening sound of bombs, bullets whistling through the air, and cries of pain and terror. Suddenly, a traditional Scottish sound seems to drown out the hail of bullets. Piper Daniel Laidlaw has climbed out of the trenches with his bagpipes to accompany his comrades towards the German lines.

“Play for them Laidlaw. For the love of God, play for them!” The piper plays Blue Bonnets O’er the Border then On the Braes O’Mar. Despite being hit twice in the leg, he continues to advance. When his comrades have achieved their target, he returns to the trench with his bagpipes.

Piper Laidlaw’s sortie is one of the more unusual episodes of the Great War. Having returned home alive from the conflict, Daniel Laidlaw played himself in the film “The Guns of Loos” in 1928, also appearing five years later in “Forgotten Men”. “On 25 September 1915, my hair turned white in just a few hours”, explained Daniel Laidlaw, who died in 1950. The piper of the 7th Battalion King’s Own Scottish Borderers symbolises “to a T” the Scottish presence in the British army – a presence that hardly passed unnoticed given that Scottish soldiers wore their own uniform: a kilt, of course, along with a leather sporran, and a beret on their heads.

These soldiers made a real impression, so much so that the Germans referred to them as “Damen von Hölle”, the women from hell; the local population was astonished to come across them without any underwear! The “women from hell” was perhaps an apt term as courage and commitment epitomised the Scottish units in every battle they were involved in.

Close to 150,000 Scots died during the First World War, which represents 20% of British losses. To get an idea of the slaughter, a comparison needs to be made with Australia. Australia and Scotland each had a population of five million in 1914: 60,000 Australians died in 1914-18 compared with 147,000 Scots. The losses were huge during the Battle of Loos: 50% of the men in each of the eight battalions of the 15th Scottish Division who attacked the village and Hill 70.

23 August 1918: the 2nd Battalion the Royal Scots attacks the Germans entrenched in Courcelles-le-Comte from the rear. The soldier Hugh McIver, a company runner, heads off alone to attack an enemy position. He kills six Germans, captures twenty more, and seizes two machine guns. When a British tank homes in on the wrong target, aiming at its own side, McIver climbs on to the vehicle and re-adjusts the shot – heroic acts which earned him the Victoria Cross, awarded posthumously to his parents in 1919 as Hugh McIver was killed on 2 September near the Bois de Vraucourt. He was 28 years old.

23 August 2008: following considerable research, and as a result of the perseverance of Christophe Guéant, a keen local historian who for two years had received the support of The Somme Remembrance Association, Courcelles-le-Comte welcomed men from the 1st Battalion the Royal Regiment of Scotland and forty or so members of Hugh McIver’s family, who had come to attend the inauguration of a “Franco-English-Scottish” memorial to honour the memory of this Scottish soldier, Hugh McIver (born in Linwood, Paisley), but also to “salute the sacrifice made by a generation for freedom”. 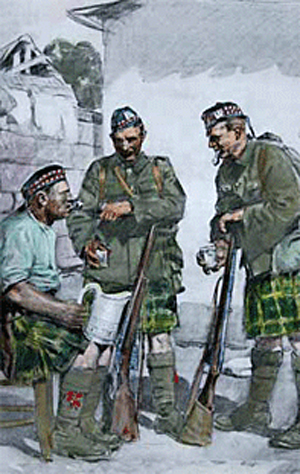