Over 4,000 enlisted under assumed names

Araca stands for the Association de Recherche des Anciens Combattants Amérindiens. In just a few years this association, whose headquarters is in Loos-en-Gohelle, has been a key player in research into the military role played by Native Americans.

Its president, Yann Castelnot, has even become a spokesperson for the families of those Native Americans soldiers who came to Europe to fight in Canadian, British and, on occasion, French units. Its aim is to honour their memory and to recognise their commitment and sacrifice which have long been ignored.

To date, Yann Castelnot has a list of more than 4,000 names of Native Americans who fought in the First World War. These include Mohawks, Onondagas, Oneidas, Tuscaroras, Chippewas, Crees, Algonquins, Malecites, Bloods, Iroquois and Sioux, who came from numerous native nations around North America. How many of them made it to the Pas-de-Calais?

It’s a very difficult question to answer at present as historians and researchers have only shown interest in this subject over the past decade.

For his part, Yann Castelnot has embarked on a long and painstaking project, as those Native Americans who did enlist did so under French- or English-sounding assumed names. Officially, they were not allowed to sign up for purely political reasons: sending “savages” to the front wasn’t the done thing. In addition, military enlistment papers in 1914-1915 bore no indication as to whether those enrolled were Native Americans or not. The only clue was their place of birth.

However, information provided by families also had to be factored in. Many present-day Native Americans are aware that their grandfathers and great-grandfathers left for the war, but most have paid little attention to what happened or what they went through. For many, their enlistment proved their patriotism… (download the pdf to read more). 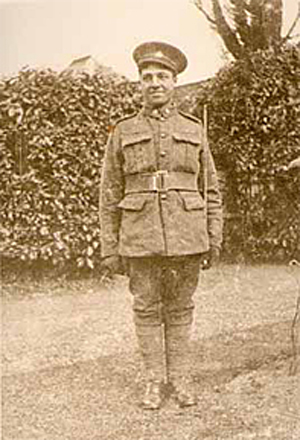 While wandering around military cemeteries and poring over registers, Yann made his first discovery: the grave of Standing Buffalo, the grandson of the Sioux chief Sitting Bull, who died during the First World War, in the cemetery along the Bucquoy road, in Ficheux.

Far from the image associated with the Sioux, that of semi-savages adorned with feathers, Native Americans were considered unrivalled warriors with qualities that were taken advantage of by military leaders. Because of their ability to move around silently and unnoticed, the most dangerous reconnaissance missions were assigned to them.
Prior to an attack, they were sent into no man’s land, often behind enemy lines to bring back valuable information.

Excellent spotters, they were also given the role of snipers, whose aim was to disconcert the enemy. The most famous example is that of Henri Norwest, who is said to have killed 115 soldiers, and was considered the best Canadian shot and perhaps the most accomplished within the combined British forces, to whom the Military Medal was promised for his reconnaissance work and comportment at Vimy Ridge in 1917.