Home - First World War - They came from across the globe - Poles

On 4 June 1917, a decree signed by President Raymond Poincaré, ratified the creation of a Polish army on French soil. Under the command of General Jozef Haller, it would comprise over 30,000 men by the end of the conflict: Polish émigrés from America, prisoners of war, deserters from enemy armies, the few Poles living in France prior to 1914 etc. However, from 1914 and 1915 on, and before this “Blue Army” came into existence, a small group of Polish volunteers fought in the ranks of the Foreign Legion. These men entered into history by the name of “Bayonnais”.

“When, on 21 August 1914, the Minister for War authorised that foreigners could join the French army, several hundred Poles made their way to enlistment offices without hesitation”, explains Robert Wabinski*, who is writing a book on the “Bajonczycy” (Bayonnais in Polish) in readiness for their centenary in 2014.

The first wave of volunteers, five hundred in Paris, the same number in Toulouse, and three hundred in Abbeville and Douai (made up of a mix of students, miners, labourers and aristocrats), responded to the appeals from different patriotic circles, associations and unions such as the “Sokol” and “Strzelec”, in the hope of seeing the rebirth of their “motherland” which by now had been divided up between the German, Austrian and Russian empires. “The French authorities did of course have to take into account the sensitivities of Russia, an allied country, which frowned upon the formation of a Polish army in France”, adds Robert Wabinski. “The volunteers were assigned to the infantry regiments of the Foreign Legion”. (download the pdf to read more) 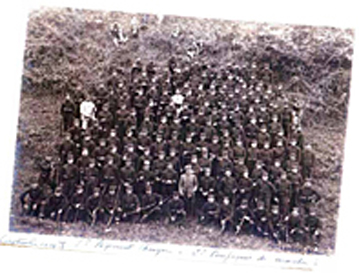