Home - First World War - They came from across the globe - Belgians

refugees in France: a civilian hospital in Neuville-sous-Montreuil

When Belgium was invaded by the Germans in 1914, many of its inhabitants fled. As was the case elsewhere in France, the Montreuil-sur-Mer area witnessed the influx of a large number of these refugees. Initially, they were warmly received. However, after four years, having all these new mouths to feed was taking its toll and these poor Belgians were sometimes referred to as the “the Bosch of the North”. However, this exhausted population, some of whom were wounded, needed to be taken care of, hence the establishment of a hospital for them.

To invade France, the Germans had to pass through Belgium and violate its neutrality. Consequently, they declared war on their neighbours on 3 August 1914. The entire country was occupied incredibly quickly. King Albert, who was at the front with his soldiers, was particularly popular with the French public. He was decorated with the Military Medal, and a “Belgian flag day”, on which badges were sold for the benefit of refugees, was created.

The French public’s affection even led to a dessert of Austrian origin being renamed “café liégeois”! The Belgian Minister for War set up his headquarters in Dunkirk and the army set up military hospitals in Calais, Normandy and Brittany. At the same time, the influx of refugees meant that civilian hospitals needed to be established. The one at the Chartreuse Notre-Dame des Prés in Neuville-sous-Montreuil, which existed from 1915 to April 1919, was “placed under the patronage of Her Majesty the Queen and His Excellency the Belgian Interior Minister”. Yann Hodicq, a First World War enthusiast and author of “Montreuil-sur-Mer: 1914-1918” explains that “the hospital had 700 beds, and the medical staff from Belgium was made up of nuns, a chaplain and two or three doctors.”

According to Yann Hodicq, it is impossible to work out now many patients were treated there:“one supposes that the number is very high if you look at the numbers who died there. 610 were registered with the town hall in Neuville alone…”, not counting the times when military personnel were also treated there. On some occasions the number of dead was so high that two bodies had to be buried at once. To deal with the ever-increasing roll call of wounded arriving unexpectedly at the railway station in Montreuil, the hospital was forced to evacuate its most able-bodied patients to other towns on a regular basis in order to free up beds. 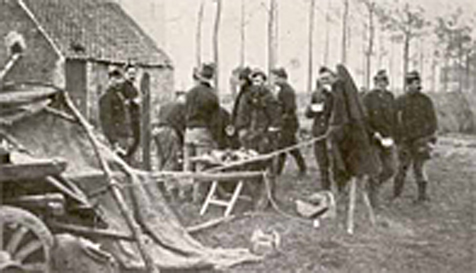